The Power of a Few Customer Calls

{I recently had a long chat with a mentee who’s just moved into product management from a developer role.  Much of the conversation was about the need to get direct user input rather than relying on technical intuition.  About the power of saying “Customers told me…” instead of “I think…”.  About not having to be the smartest person in the room while we’re marshaling facts and spotting outliers among a diverse group of users.  I was thrilled to get this back.}

Our VP of Research wanted to market test some new functionality. He came to me for assistance setting up a social media campaign, because they remembered my professional development posts about testing ideas with AdWords and landing pages. Playing with the app design, I could see that the functionality was there, but the usability was not. I took a bunch of screenshots, came up with improved flows that were easy to implement. I was tempted to send them back right away, but I remembered your advice to have real users in mind. So I talked to a few… in fact I filmed one. Her feedback validated my assumptions, so I carried on with some tweaks.

Now, of course, I learned the app by spending time with it, by taking screen shots and documenting the current flow. And I very clearly laid out 8 suggestions using visuals. And I thought carefully about what changes NEEDED to be made and how to do so with the least amount of effort. But that was baseline, and that just got me to “playing with ideas.” Adding real user testing boosted my credibility, got me an attentive audience, and improved our odds of doing the right thing. 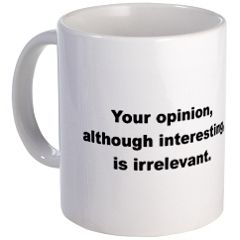 {Seems completely obvious if you’re already doing it, and nearly free.  And user input doesn’t absolve you from applying your judgment|expertise|deep knowledge.  But intellectual jousting with your development team (“I’m right because I’m smarter”) is a poor strategy.  As a product manager/owner, you have to get to good answers and also have market facts on your side.
A nod to the Pragmatic folks for their long-standing hardware reminder at right.}

You should be interacting directly with users, customers, prospects or lost accounts every couple of days.  It makes you and your team smarter and boosts your customer street cred.  Write down what you’ve heard ASAP, route it to the team, and look for insights/trends.

In this webinar, we talked about the fundamental differences between software, hardware/physical products, and services product management.…

There’s a pattern I sometimes see at software companies, particularly those targeting enterprises or on the long march moving…