The New York Times ran a heart-breaking 7500-word article in today’s Sunday Magazine about Sandy Bem’s struggle with Alzheimer’s and her resolution that before the disease stole her mind, she would kill herself.  It was a brave piece of reporting. But an mobile ad placement stopped me dead cold. 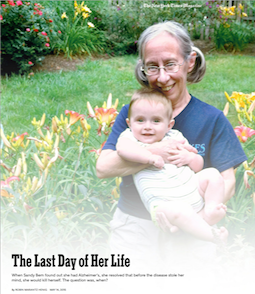 The print edition, glossy and sophisticated as the Sunday magazine always is, keeps most ads on separate pages so that content/pictures can flow smoothly.  The only same-page ad was toward the end of the printed article, for a senior-friendly stairlift.  The (web) online version included geo-targeted sports ads for major league soccer and professional skateboarding.  No angst for me.

The mobile (iOS/Safari) edition showed a wildly inappropriate ad for Tile which reads “I lose my keys ALL. THE. TIME.”  Every early Alzheimer patient’s deepest fear.  It appeared every few inches, probably ad-tech-selected for content words like “memory.”  Or perhaps just a statistical fluke, since Tile is a heavy advertiser with The Times.  Either way, hard for me to choose between being deeply offended and encouraged that Big Brother Data doesn’t yet anticipate every reaction of mine.

There’s a pattern I sometimes see at software companies, particularly those targeting enterprises or on the long march moving…

Podcast: What Do You Do With a HiPPO?

Rachel Obstler, VP Product at Heap, invited me in for a two-part conversation [https://heap.io/resources/product-therapy-podcast/product-therapy-what-to-do-with-a-hippo] on…

Podcast: Why Finding Insights is So Painful

Rachel Obstler, VP Product at Heap, invited me in for a two-part conversation on her Product Therapy podcast.  This is…